At yesterday’s Capital Markets Day for Seeing Machines it was standing room only, as Colin Barden an independent analyst at Semicast Research presented the news that investors in Seeing Machines have long waited to hear: though the coronation has been delayed, it will be the King of DMS.

It was hard news for rivals but, in one slide, Barnden presented his projections for the market shares come 2022. He estimates 40-45% for Seeing Machines, followed by 15-20% for Mitsubishi Electric. All other rivals are left lagging far, far behind, with Smart Eye in particular estimated at 5-7%.

That said, I saw no evidence of complacency from the Seeing Machines staff, quite the reverse. McGlone, in particular, came across as a man determined to deliver profitable growth. He certainly doesn’t look like the sort of guy who will let a rival eat his lunch. 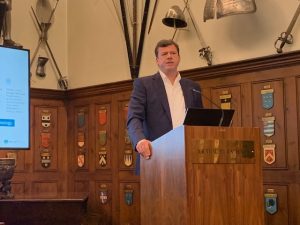 The growing interest in its DMS technology was clear from the host of analysts I met at the event: Sanjay Jha of Panmure Gordon, Lorne Daniel at FinnCap, Caspar Trenchard at Canaccord Genuity and even one from Steifel (there may well have been others). I’m sure the house broker Cenkos was represented but house analyst Jean-Marc Bunce was the invisible man on this occasion.

Probably, a wise decision on Bunce’s part as I’ve been trying to find out why he’s taken such a conservative stance on fleet. In his note dated 23rd September he states on page 1: “We believe the guidance for 27-30k connections at the end of FY20 is conservative and underpinned by a strong pipeline.”

Yet on page 4, he contradicts this, becoming ultra conservative, when he writes: “….our Fleet connection forecasts are based on connections below the guidance of 27-30k”.

I wondered why he decided to do this and also upon what number of fleet connections he actually based his projected revenue figure of A$20.9m? By my calculations to arrive at A$20.9m he must have used less than 18,000 installations, which does appear excessively low.

Yesterday the new CEO, Paul McGlone was in combative mood as he faced down attempts to extract projections on the number of Fleet sales for 2020, sticking to guidance of 27-30k. He even declined to provide a current figure. I assume this is because Seeing Machines hopes to upgrade at the interims and doesn’t want to spoil the surprise. Personally, I don’t particularly like surprises even to the upside.

The reduction in the unit cost of Gen 2 Guardian by 21% announced yesterday must surely drive increased uptake from fleets as will the increasing number of distributors and deals with insurers.

Mike Lenne, the Human Factors expert who heads up Fleet does appear to be its secret weapon when it comes to persuading Fleets to use their technology to improve safety. HIs calm, analytical approach should pay dividends and puts Seeing Machines in a league of its own.

It was the first time I’ve met Tim Edwards, one of the original brains behind the technology along with fellow co-founder of the company Sebastien Rougeaux. Edwards comes across as a very modest man, particularly for a genius who jointly developed this life-saving technology.

While CEO McGlone and Pat Nolan, who heads up Aviation, were chided slightly for building up expectations re. an aviation licensing deal with CAE and L3 Harris, I got the impression such a deal is at most a 2-3 months away. We’ll see I guess. The great news is that end users (such as Alaska Airlines) are now requesting that manufacturers of full flight simulators now have eye-tracking from Seeing Machines.

As for Nick DiFiore, who heads up Auto, I’m expecting him to deliver a lot. Volvo for one, VW for another pretty soon. Followed by Japanese OEMs. Oem decision-making has been the main reason for delays up to this point but See does appear remarkably well positioned with Xilinx to grab market share from Nvidia and Mobileye. The fact that Fovio can identify an incapacitated driver makes it a shoo-in for Volvo and parent Geely may well have decided it needs it too.

The US market really needs to hear this in its own accent and so it was good to be told by Paul McGlone that it will be getting a US broker. I do hope it is Morgan Stanley. I’ve long wished to read/hear Adam Jonas extol the virtues of Seeing Machines.

Overall then, while I would have liked more opportunity and time for detailed questions, I feel that further patience will be handsomely rewarded here. Of course, every investor should do their own research.