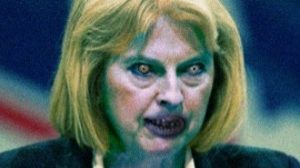 ‘Their’ UK Government is clearly incompetent, too ideologically obsessed with cutting regulations and implementing muddle-headed, ’balance the books’ austerity to care for us peeps.

That much we know after Grenfell Tower fire burnt down the last remaining veil hiding the Tories’ duplicity and selfishness. The exact number of dead in that fire is probably well into triple figures – but don’t expect a realistic death toll until the heat of the summer is long past. Tempers might combust and the establishment don’t want their stage-managed democracy torched by the angry masses.

But I digress: up and down the country most people can increasingly smell the stink of this Tory Government’s rotting corpse. With every passing week the stench gets stronger. Even the DUP’s futile attempt to give it the kiss of life won’t revive it.

What is especially shocking is that this Zombie Government cares more for the dead than the living. Theresa’s May’s wet dream would be the death of Corbyn. I imagine she’d happily splurge on a state funeral if it meant her failing grip on the cliff edge of power became a little tighter. She might not be alone in twisting and turning in orgasmic delight at such a fantasy – but Boris doesn’t kiss and tell in public.

How do I justify that statement? Well, first I’d cite the ‘fact’ that I believe it to be true. Okay, that’s too weak – though I think you may believe it also.

Secondly, they’re doing little to prevent pollution from diesel vehicles that is sending many to an early grave and damaging the lungs of children.

Lastly, what else can explain the fact that, while •thousands are injured and many killed in road accidents every year caused by driver fatigue and inattention, ‘our’ Government is doing little to encourage the adoption of technology that could drastically reduce those numbers.

Yes, that’s right. The technology to warn drivers when they’re falling asleep at the wheel or distracted (for example, by using a mobile) exists.

Yet the Government does nothing to encourage its adoption: it doesn’t test it or mandate it on UK roads.

Noblesse ought to oblige the Government to do the decent thing but this mob in power don’t give a fig for the living.